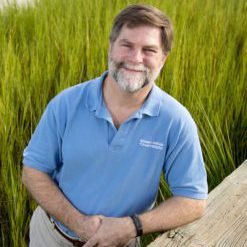 Clark Alexander is the Director of the University of Georgia’s Skidaway Institute of Oceanography on Skidaway Island in Savannah, GA, and a Full Professor in the Department of Marine Science on the UGA-Athens campus. Alexander earned a BS in Oceanography and a BA in Geology from Humboldt State University in California, both in 1983, a MSc in marine geology and a PhD in marine sedimentology in 1985 and 1990, respectively, both from North Carolina State University. He joined the Skidaway Institute of Oceanography in 1989 as a Post-doctoral scientist. He was appointed Director in 2017. His general research focus is on understanding sedimentary processes in estuarine, coastal and continental margin environments, using both field-based sedimentological and radiochemical tools and GIS-based techniques, with funding from NSF, ONR, USGS, BOEM, NOAA and GA-DNR. His recent projects have focused on Quaternary geologic development of continental margins and coastal zones, coastal and estuarine shoreline change patterns, bathymetric and benthic habitat mapping, and coastal hazards in the southeastern US. He recently led a regional (NC, SC, GA and FL) team of scientists and managers in the development of a coastal hazard vulnerability assessment tool with support from the Governors’ South Atlantic Alliance. Alexander works closely with the City of Savannah-Chatham County Metropolitan Planning Commission to support municipal resiliency planning efforts and with the Georgia Department of Natural Resources to foster sustainable management of Georgia’s estuarine and coastal resources. He also served 8 years on the Georgia Coastal Marshlands Protection and Shore Protection Committees, where he worked to balance development and natural resource protection in our coastal counties.